skip to main | skip to sidebar

I confess: I cheated. The whole purpose of this blog was to keep our friends and family up to date on our many goings-on, to share the news that's sometimes awkward to share, like our struggles with infertility. But when it came down to it, I had trouble writing down some of the biggest breaking news, like the results of our first pregnancy test...which actually came on December 23rd.

Yup, that's only 11 days after the ZIFT procedure. I had been warned not to take a home pregnancy test, because they're not always accurate that early, and my nurse actually went through emotional hell herself when she was going through IVF and peed on a stick and initially got a negative result -- when in fact she was pregnant.

Somehow I managed to stay calm until the 23rd, and calmly went in for my blood test that morning. Then my dad (who was visiting!) and I went down to Palos Verdes to have lunch with Hana and her parents, which was quite lovely and a perfect distraction. The test results were going to be in that afternoon, around four, so I left my cell phone turned off -- I just couldn't deal with the prospect of answering the phone in front of ANYBODY and getting news of a negative result. I asked that the nurse leave a message instead, which Mark and I could then listen to in private.

But...when I checked my messages... nothing. And Mark tells me the only message he heard, on our home machine, was the nurse saying, "call us." I had asked them to leave me a message with the results, so this was all very vexing. And wouldncha know it, it's after 5pm and no one's picking up at the clinic.

So, nerves drawn tighter than ever, I emailed both my nurses in hopes that someone would get our plea for an answer.

Within the hour.... I had it: we were pregnant.

...sort of. It was INFINITELY better news than NOT pregnant. As good a start as we could hope for. Christmas was not the nightmare I thought it might be. But looming in the next two weeks were more blood tests, to a) confirm we're still pregnant and b) make sure my hormones were rising appropriately -- i.e. at least doubling, every three days.

There was nothing to do but hold our breath each time. And with each positive test, each hurdle cleared, we grew more hopeful. In fact, my hormone levels were skyrocketing to the point where Mark seriously began doing some research... and found that my numbers suggested we had twins in the oven. (That doesn't sound right....)

Then, on January 9th, it was the moment of truth: our first ultrasound. At this point, I was (theoretically) six weeks pregnant, so the heartbeat should be visible. Maybe there would be two...or more heartbeats.

But there weren't. There was just the one. But oh man, what a relief it was to see that one, beating away at a healthy 160 beats per minute! Our little peanut: 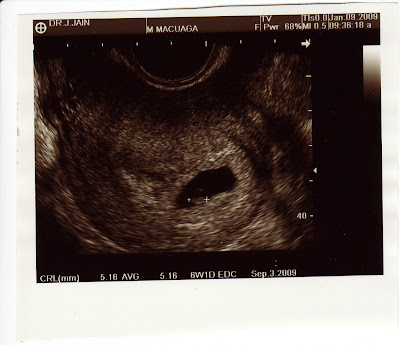 And this peanut has been busy growing. Growing into a fava bean, at 7 weeks... 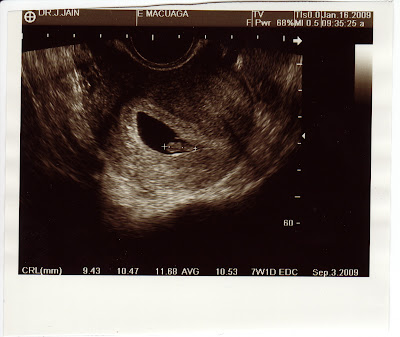 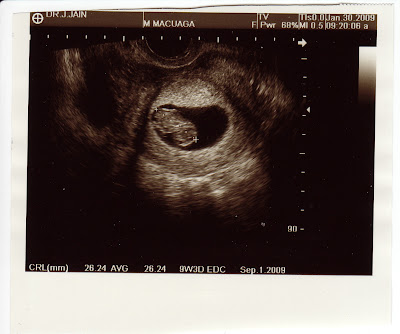 OK, so you can't see it bouncing, but I swear that when the doctor was scoping it out, taking measurements, our little baby moved its arms (yes, arms already!), did a little jig, and flipped over. It wasn't just me, we all saw it and yelped HEY! Hello to you too!

So....that was at 9 weeks. Tomorrow we'll be at a full eleven - almost the end of the first trimester. I'll have the last ultrasound with our fertility doctor next Friday, just after 12 weeks; after that, we'll be with our prenatal care provider... which is a whole other, um, thing. Plus, we got genetic testing coming up (for Down's and other abnormalities) -- all nerve-wracking.

But, for now, we're just thrilled we've made it this far.

FAQ:
When is your due date? September 3rd -- a few days before, haha, Labor Day.
How are you feeling? I feel nauseous on and off throughout the day, but if I can figure out what to eat, I can keep it down. The weirdest thing has been going through a citrus phase, and also now an anti-shrimp, octopus and squid phase. And I loooooooooove shrimp. So weird. Otherwise just sheer exhaustion kicking in at around 6pm, but that's actually already easing up -- I've been getting by lately without full-on naps.
You weren't going to West Coast IVF were you? No. The now-infamous Beverly Hills clinic, behind the recently born LA octuplets, is not where we went. But I do remember seeing that clinic on our list of options last fall. Yikes. I love our doctor. I mean, yes, I love him because he successfully guided us through making it all happen, but I've thought about this, and I truly think that even if we hadn't gotten pregnant this first time -- I think we would have felt we got the best care possible, and made the best decisions possible together with our doctor. Which can be a pretty rare thing to feel. S0, ask us any time you or a friend is looking for fertility treatment or egg-freezing.

All Hail the Candy

Back in November, when we were getting closer to opening The Curious Palate, Mark, Elliot and I had a heated debate (over different cuts of meat, of course) about whether or not to have an opening party, and whether or not to reach out to press. I thought it would be important, but frankly, we also weren't ready. And Mark firmly believed in the viral power of foodie bloggers -- and that they prefer to discover places themselves, rather than get an invitation.

Well, no question he was right.

Friday morning, January 16th, online culture mag The Daily Candy published its daily e-news on the best of the local scene. In their Los Angeles edition (they are based in NYC), the lead was The Curious Palate.

By noon, the line of customers was out the door.

Thankfully, we'd been given a heads up by the writer that the article would be coming out -- so Mark had spent much of Thursday making extra food in preparation for the crowds. Still, by dinner time, they'd run out of many things, and the weekend rush was still to come. Needless to say it was our best day ever by FAR. Frickin' incredible.

I was working at home all day Friday, but on Saturday I threw on the TCP T-shirt (our uniform) and headed down to help, so I saw the crowds for myself. 4:30pm and the place was still packed with diners.

Sadly (at least for some, in a way), one of the changes that's come about after the kitchen staff experienced work flow with this number of customers (which, by the way, was above and beyond our 12-MONTH target) is that we've had to drop our "Mains" on the menu and focus on our "Sandwiches." Mark wasn't happy about not being able to serve our signature Margarita Chicken straight out of the oven -- it's just not as good -- and it was just getting too complicated in our tiny kitchen. So, the "Sandwiches" section of the menu has been expanding, but for now, hot dinners to go (or to have for lunch) -- like braised apple cider pork -- are off the menu. The mac 'n' cheese and soups and sautéed spinach are still around, though, so there's plenty of dinner material, and we may bring back the meatloaf as a cold to-go, for reheating at home. We'll see.

We also needed to postpone our farmer's market debut (not counting the potato latke stand that we had in December, a one-time thing by request), because now we're suddenly getting orders like a special brunch reservation for 10, and a catered lunch for 20, etc. And our patio space is begging to be finished. We may need to hire more staff, since we're 7 days a week now and obviously I can't be there every day. But we also need to watch and wait to see the ebb and flow of customers.

The blogosphere is definitely starting to buzz about TCP: we've gotten articles in Triplecreme (12/11/08), LA Eater (12/24/08) and Chowhound. We've also been Yelped a number of times -- and we got a call from the LA Times as well, wanting pictures for their blog post. (You can find the final listing here.) 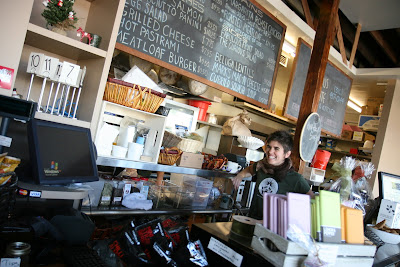 OH, and our official web site is FINALLY up! Check it out: www.thecuriouspalate.com. Updates and new pics will be ongoing, but at least it's out there for people to find. Hurrah!

When we first opened, each day was better than the next -- more people, more $, more love. Then there was a bit of a lull after Christmas...but now in January we seem to be back up to speed. Hopefully we'll start to see increased traffic from people reading those foodie blogs, and then of course we have MUCH to do in terms of our own marketing push. For starters, we're putting together a news letter... I know a reach out to the local library, firehouse and schools are in the works... and we've hardly scratched the surface of generating interest within the store -- more signs, discount items/sales campaigns, recipe sharing ideas, demos... Not to mention: the patio space needs finishing and...long story on the wine & beer license. So, much to do.

But the initial launch has been good. Spread the word! oxoxoxo
Posted by Emi Macuaga at 12:15 PM No comments:

This is our story.

pic of the week

A two-berry chocolate "sandwich." A sin to eat, and a bigger sin to eat without coffee.